The SVBONY SV40 10x42 binoculars are a fantastic value for the money! They have replaced the 10x50 binoculars I have used for over 40 years.  Figure 1 shows what comes in the box.  It includes the binoculars, a soft case, neck strap, and instructions.  One thing I liked were that the front lens caps are attached to the binoculars and the back lens caps are attached to the neck strap making them hard to lose.  I am an amateur astronomer so I was interested in these binoculars from an astronomy perspective, and they did not disappoint!  I perform a lot of public outreach showing people the heavens through large telescopes.  At these events I’m often asked what is the best first telescope. People are usually surprised when I tell them a good set of binoculars.  The reason is that it is a good introduction to the sky.  They are small and easy to use and are a good introduction to astronomy. If you decide to go further you can get a telescope, but you will always keep the binoculars.  I own several pairs of binoculars, shown in Figure 2. From the back left they are 7x35, 11x80, SvBONY 10x42 (reviewed here) and my trusty 10x50 Sears binoculars. The 7x35 are general purpose daytime use while the 11x80s are built for astronomy, but must be used on a tripod.  I have owned the Sears 10x50s for over 40 years and they have always performed well for night time use as well as daytime use.  But, the SV40s have now replaced them. While the SV40s are a bit heavier than others in their class, at 22 oz. they are much lighter than the 33oz 10x50s. Optically they are much better showing no color fringes that are often seen in lower priced binoculars.  Focusing was easy and precise both during the day as well as on astronomical objects. They could actually focus as close as 10 feet which is much closer than any binocular I've owned. 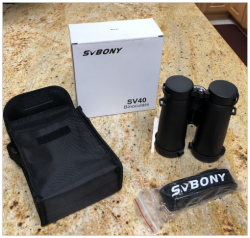 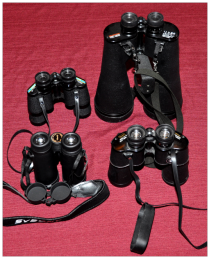 For this review I also purchased the SVBONY Full Metal Binocular Tripod Bracket as well as the SVBONY Universal Cell Phone Adapter Mount for binoculars. Although you can handhold these binoculars while observing astronomical objects, I recommend getting the tripod bracket to hold them steadier.   The full setup including the SV40, tripod adapter and cell phone adapter is shown in Figure 3. 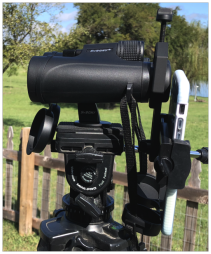 The binoculars magnify the image by a factor of 10.  This can be seen in Figure 4.  The left side was taken with my iPhone while the one on the right was with my iPhone attached to the binoculars as shown in Figure 3. The bird was a little over 300 feet away at the time. As you can see there is quite a difference.  The bird had moved a bit more around the pond when I took the pictures with the binocular which is why the background is different. 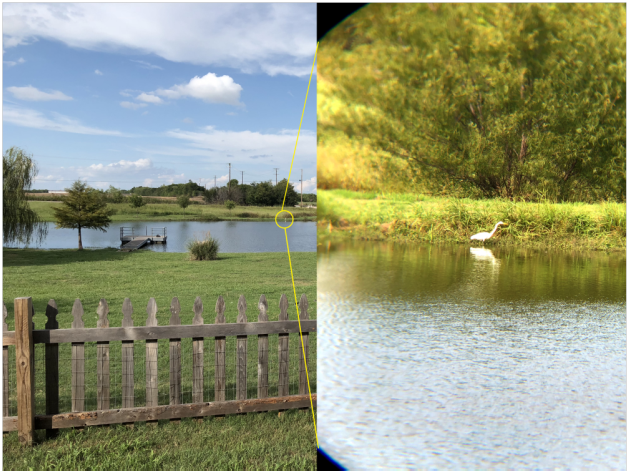 Figure 4: Difference with and without binoculars

Binoculars come in many powers but I find 10x a good compromise between being able to hand hold without the image shaking and being able to magnify the image enough.  I have found 10x to be great at observing wildlife, using at a sporting event in a stadium as well as night time viewing. 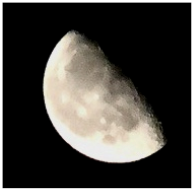 Figure 5: Picture of the moon taken with the SV40 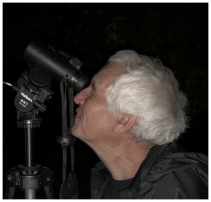 Figure 6: Bolivian Astronomer getting his first look at the Andromeda Galaxy through the SV40s

I tested the SV40s on several night time objects.  The moon was great and you could make out a lot of features including craters. The image I took with my iPhone through the SV40s, shown in Figure 5, does not do it justice. Planets, on the other hand, are not good targets for binoculars as they do not have enough magnification. However, I was able to see the moons of Jupiter.  You cannot quite make out the rings on Saturn, but can just tell that it is very oblong and not round.  Right after I received the SV40s I took them to an Astronomy Seminar. You cannot take good images of dark sky objects with the binoculars and a cell phone, but they do offer great views of the heavens. We were able to observe the star clouds of the Milky Way in Sagittarius, the globular cluster M15, and the Andromeda Galaxy. The binoculars performed great on each object.  Figure 6 shows an astronomer from Bolivia getting his first look ever at the Andromeda Galaxy.  He was very impressed with the view.

In conclusion, I’ll reiterate what I said in the first line, Great Binoculars, Great Price! For astronomy, sporting events, wildlife viewing or anything else you need to see close, these are probably the binoculars you want. I’ll be taking a vacation soon to Hawaii and I’ll be taking these along to get views of more southern astronomical objects.