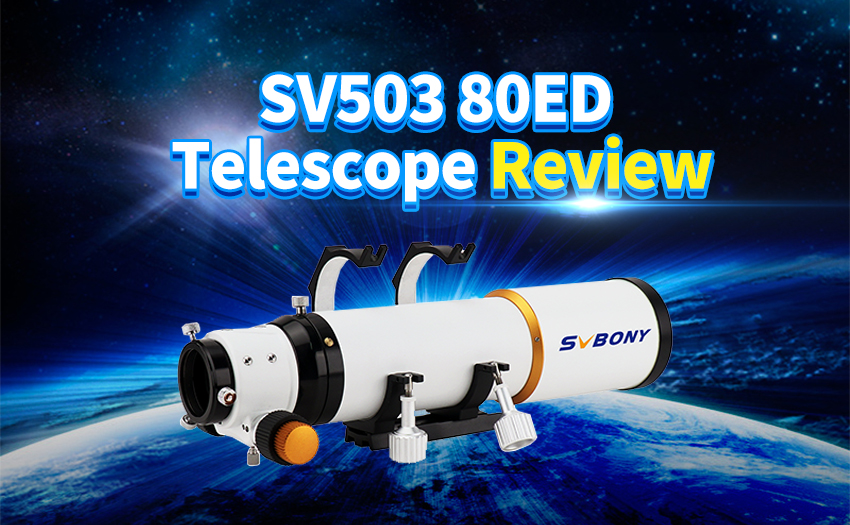 A review of the SVBONY SV503ED refracting telescope.

When Rita Hu of SVBONY posted on social media that she was inviting expressions of interest to receive a sample of their new telescope to review, I replied without any great expectation that I would be among those chosen. I was then surprised when I received an e-mail from Rita saying that a review sample of the new scope was in the UK and asking for my details so the ‘scope could be sent to me.

A week or so later, the telescope arrived.

The SV503 is attractively finished in a white-powder-coat, type eﬀect, with gold accents at the base of the dewshield and micro-focuser, something similar in appearance to the Gold-accented Zenithstar scopes from William Optics.

The tube itself is very substantial and when tapped, gives oﬀ a sound what I remember to be similar to tapping on old-fashioned, cast iron rainwater downpipes!. This is a scope which is clearly designed to last a life-time.

At the objective end, there is a push-fit lens cap, much more substantial and easier to fit and remove in the dark, than the fine-threaded cap on my Skywatcher Evostar 72 which can be really fiddly. The dew shield with the SVBONY-branding is retractable, again an improvement on my own scope where the shield is retractable only in the sense of you take it oﬀ or leave it  on!

The supplied tube rings are felt-lined and provided with large, easy to grip adjustment knobs. The provided dovetail bar measures 14cm. Having encountered balance issues with my own ‘scope where the addition of cameras and flatteners can make the set-up back-heavy, I would have preferred a longer dovetail bar, but did eventually get the arrangement to balance. with the provided bar.

Moving down the tube to the focus end, the first surprise was a built in field rotator, a vast improvement on my Evostar 72 where I had the option of paying extra for the Skywatcher rotator which screws into the end of the draw tube or, as I did, fashioning my own by adapting the T-ring which fits to my camera.

The focus tube extends out to 90mm, with a clearly marked cm/mm scale, allowing for repeatable set up for diﬀerent camera combinations whereas my Evostar focus tube has no graduations and I have had to mark the tube with a Sharpie to know where to set up my initial  focus.

The eyepiece adaptor is a 2” version with a substantially made 2” to 1.25’ reducer and both the 2” and 1.25” use compression-type fittings which minimise any damage to eyepieces and flatteners. from direct-screw fittings.

The only slight disappointment was the lack of a provided finder mount despite there being fixing points for one, hence for my review, I installed the finder mount from my own Evostar 72 so I  could attach a finder and, later, my guide  scope.

With my Canon EOS600d and field flattener, the weight goes up to 3515g and when fully loaded with an additional ZWO224mc and Astroessentials 32mm f4 guide scope, the scales read  3900g.

On paper, this is within the 5kg payload capacity of my Skywatcher Star Adventurer tracking mount, but in the real world, I find that my own Evostar set-up, at just under a kilo lighter, is at the useful limit of this mount, hence my only use of the SV503 was by way of it being mounted on my Skywatcher EQ6r equatorial mount.

In this traditional UK summer, it was several weeks before I had enough clear-sky opportunities to use the scope for astronomy. Until that time, I only had the opportunity of using the scope for terrestrial viewing where the scope produced rich, contrasty images, with a pleasing colour  balance and no sign of fringing, colour aberration or other  artefacts.

On the first opportunity I had to use the scope for astronomical viewing, I was able to view a just over 50% illuminated moon, as well as Jupiter and  Saturn.

The wide focus range allowed me to use a wide variety of eyepieces and barlows, with no issues about bringing any of them to focus, unlike my own Evostar 72 where the narrow focus range and lack of in-travel means that certain eyepieces can’t achieve  focus.

Despite some haze, I did manage to take some photographs. Without my field flattener, my EOS600d was right at the end of the range of travel for the focus tube although could bring it to focus, but my ZWO224mc could not be brought into focus without using a diagonal to extend the focal path. Using the latter, I was able to take a series of movies which I stacked and then combined into the 3-panel photograph  below. 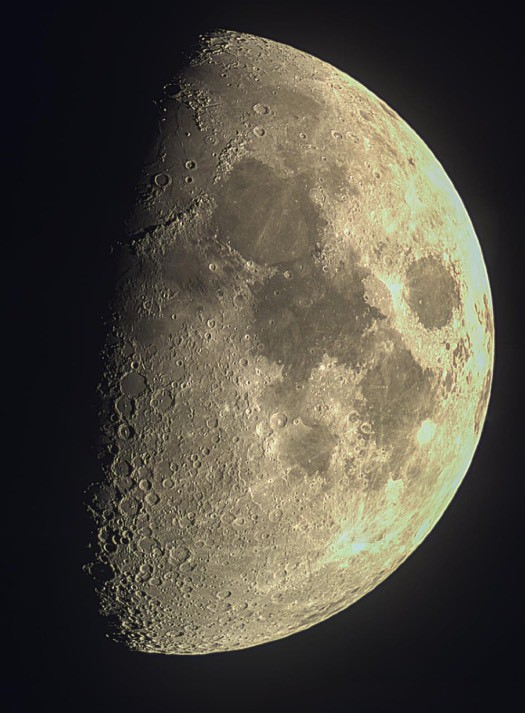 Jupiter and Saturn were very low in the sky from my observing position, hence viewing was not ideal, so I could not discern the divisions in Saturn’s ring system which i would ordinarily expect to see but despite the poor seeing, the Jovian moons and belts were clearly  visible.

As the haze closed in, I did point the scope at M57, the ring nebula and although small, the smoke-circle structure was clearly visible with moderate magnification. Before I packed in, I could not resist a look at my favourite double star, Albireo, in the constellation of Cygnus and with a 9.7mm Meade 4000-series eyepiece producing a magnification of just under 60, the pair were a beautiful sight, the SV503 producing faithful colour rendition of the yellow primary and contrasting steely-blue of the secondary.

For deep sky images, I had to wait another week or so for a forecast of clear  skies.

Having set up, polar aligned, focused and plate solved my way to M31, I set up an imaging sequence, but almost every image was ruined by clouds which left me with only a single, unstacked, uncalibrated image to use. 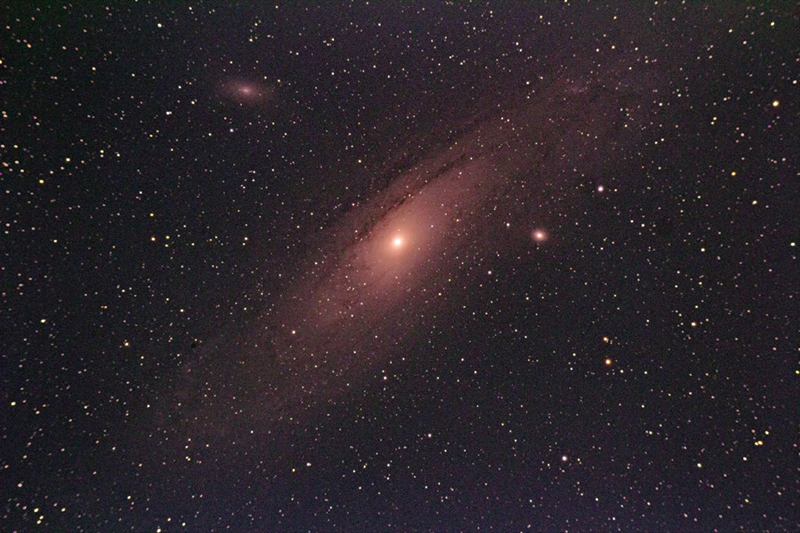 From this single image, it was apparent that, like nearly every other ‘scope of this design, the SV503 suﬀers from field curvature meaning that images might be correctly focused in the centre of the field, but stars away from  the centre are not at the same focus, producing doughnut shaped stars which require the use of a field flattener to correct. I was not expecting to be able to  avoid using a flattener, but wanted to have at least one attempt at using the scope uncorrected so that I could see whether curvature would be an issue and, if so, by how much. (see cropped section- right) 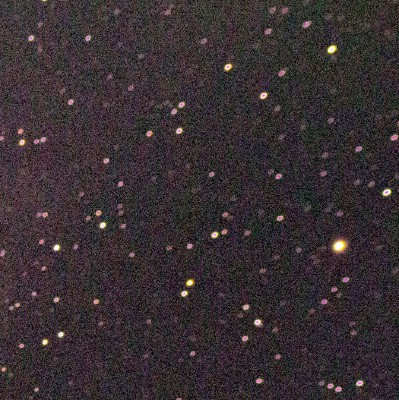 My next imaging session was far more successful. This time with my StellaMira field flattener attached to my EOS600d, I was able to complete an imaging session of 30 x 4-minute exposures, at ISO800 of the Eastern Veil nebula. With an equivalent amount of dark frames and then additional bias and flat frames, I was able to obtain the image shown below. This time, even with a flattener not specifically designed for this ‘scope, the stars were pin-point all the way into the corners, albeit the image I have used for this review is cropped for  composition. 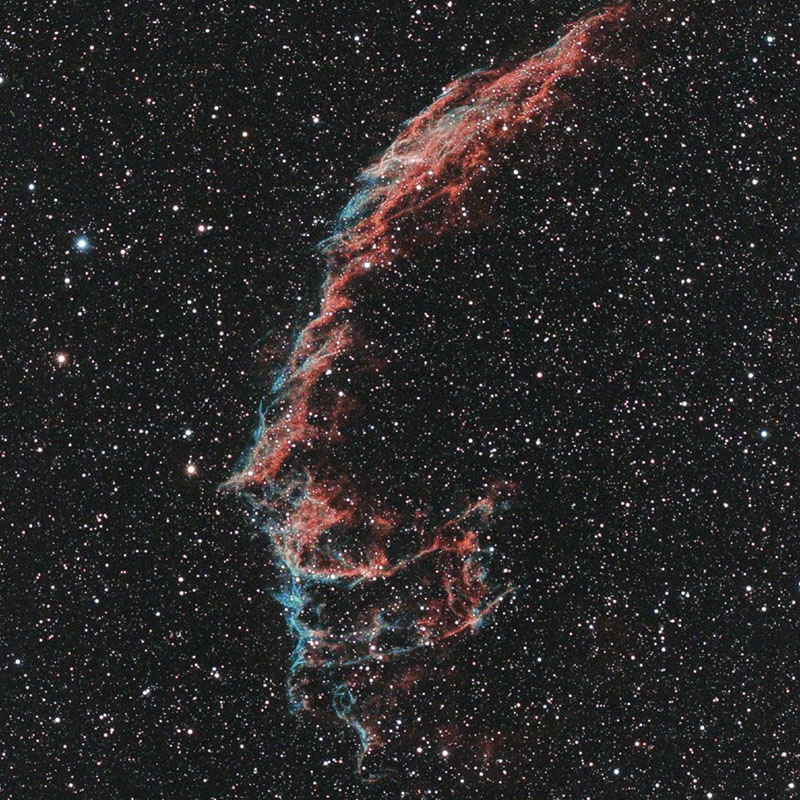 Over the course of the next couple of weeks, I was able to use the SV503 a number of times and produced images which I was really happy with, despite my rather limited photo processing   skills.

What I noticed about having the scope mounted, ready for use over several nights, was how stable the focuser was. Once I achieved focus (which for my DSLR and flattener, was with the focus tube extended to 33mm) and locked it down, I could come back to it night after night knowing that my focus for polar alignment and image acquisition would need little, if any further adjustment.

Over the next pages, I have posted a sample of some of the images I was able to acquire. 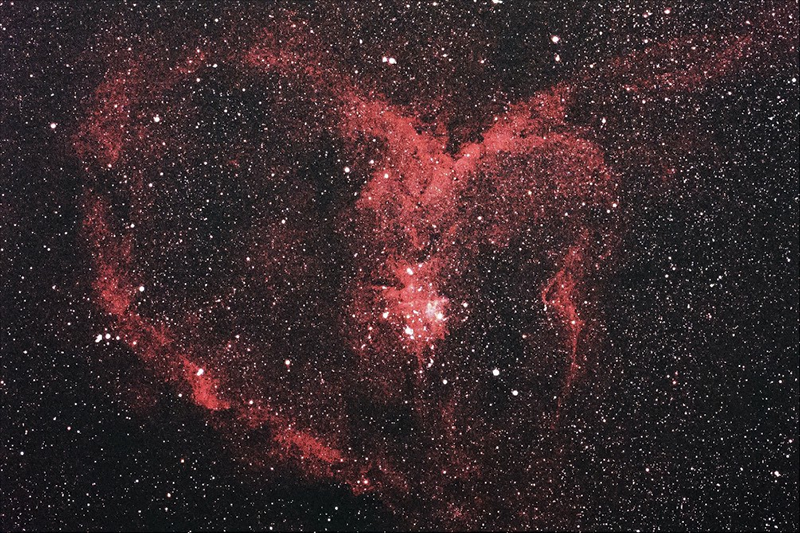 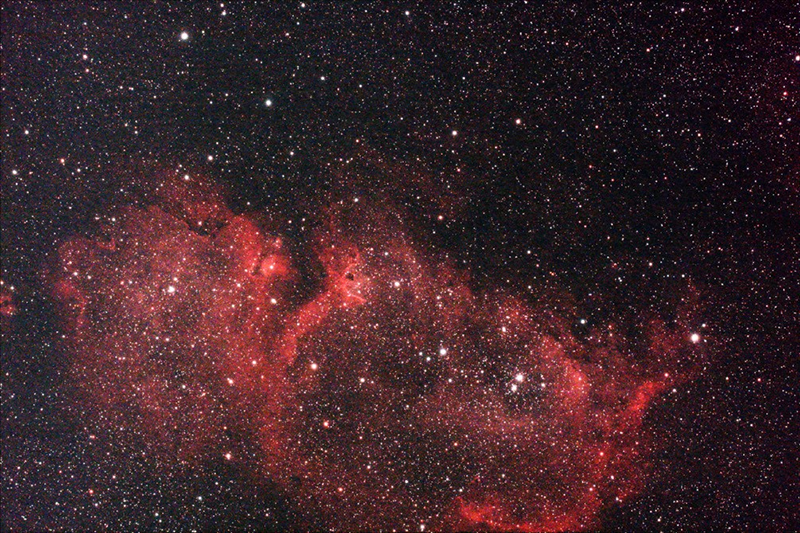 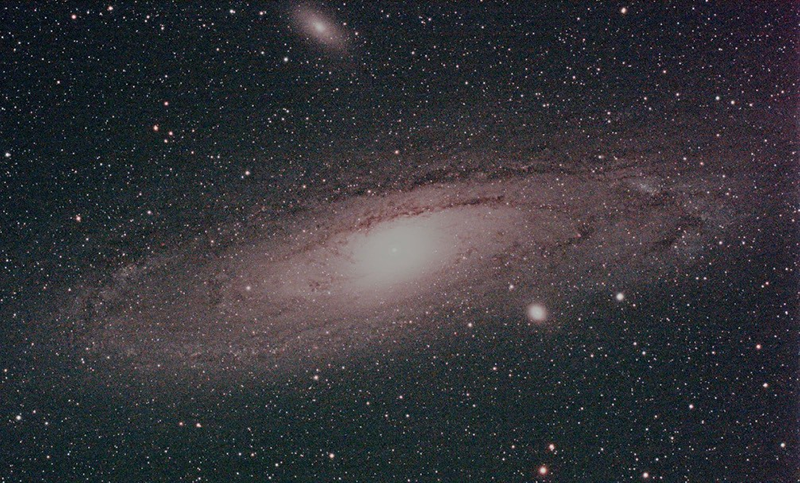 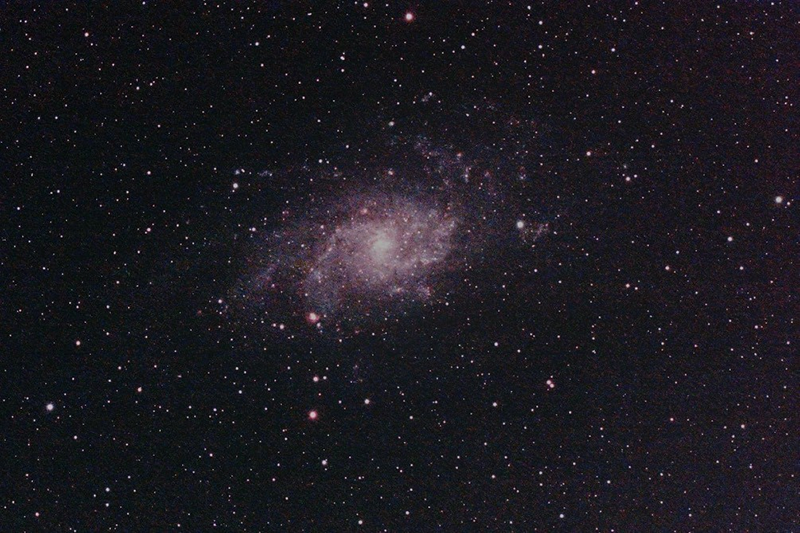 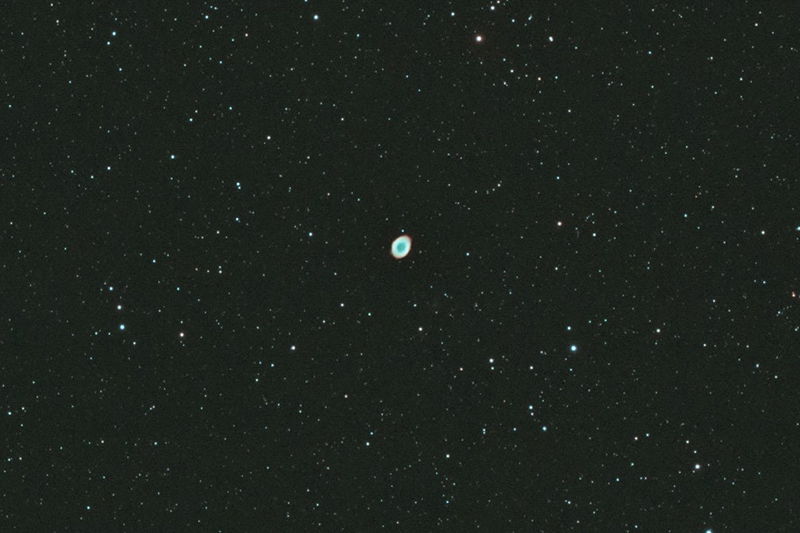 The area of nebulosity surrounding the star Sadr in Cygnus. 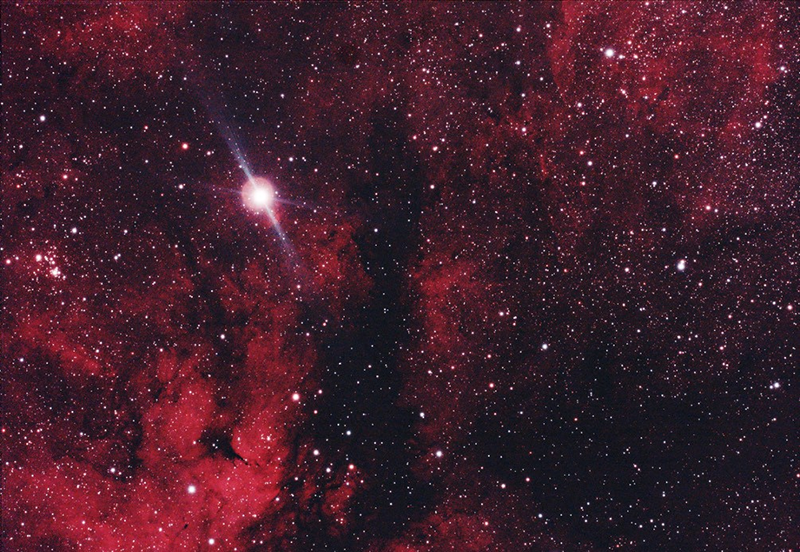 M27, the Dumbbell Nebula in Vulpecula 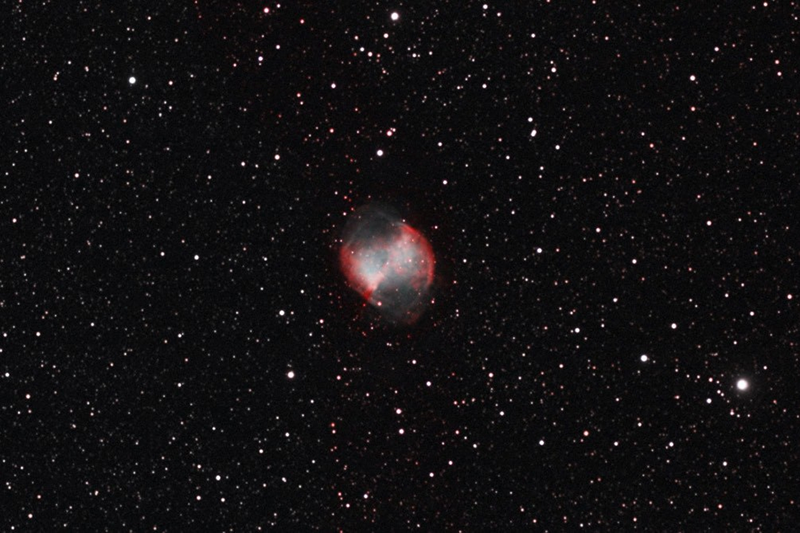 M15, the globular cluster in Pegasus 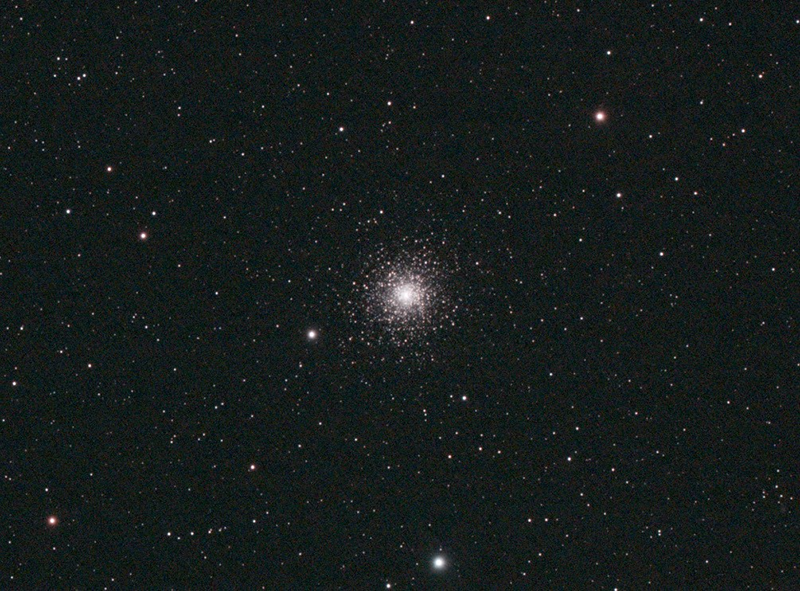 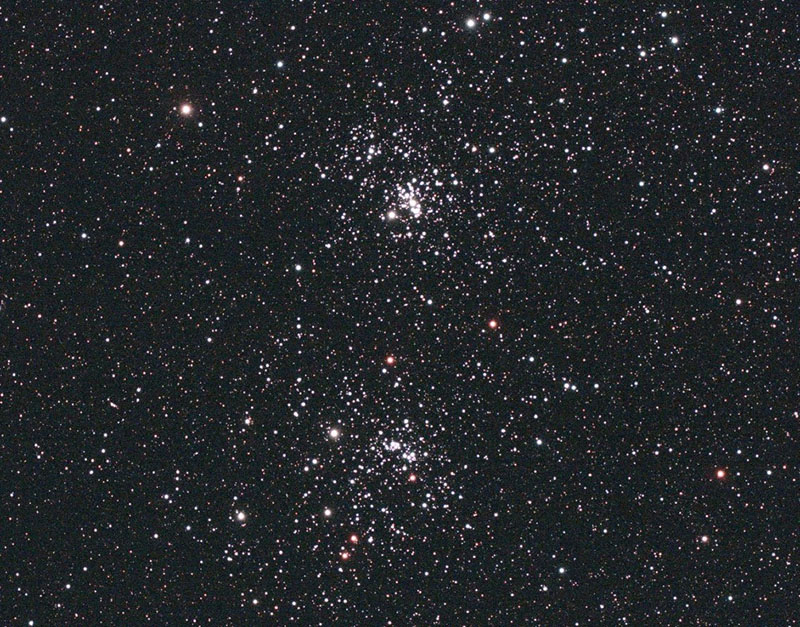 Finally, after several sessions of deep sky astrophotography, I turned back to the planets and this time, to Mars which was now rising early enough for me to see  it.

The SV503 produced stunning views of the Red planet, with clear surface features and the glittering polar ice cap being visible.

For these observations, my Meade 9.7mm eyepiece with a Celestron 2.5x Luminos-series Barlow lens yielding a magnification of approximately 145 produced the best view. Again, I tried the Explore Scientific 3mm eyepiece, with a magnification of 187, but I found the image less sharp than the lower magnification combination, so maybe that 50x per inch rule of thumb still stands true.

I was able then to take an image, this time with a ZWO224mc camera, through the 2.5x Celestron Barlow.

Using Sharpcap, I obtained a movie mage file of 3000 individual images, the best 25% of which I stacked in AutoStakkert!3 and with some slight adjustments in photoshop, obtained the image below. 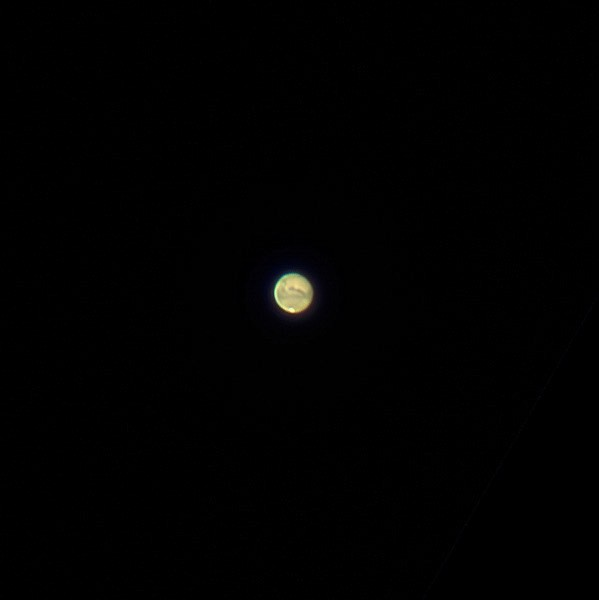 In conclusion, I very much enjoyed my time with the SV503 and was sorry to have to package it up and send it to the next reviewer.

It is a very capable telescope being equally at home for visual observing or photography and for those looking for a telescope and whose research has so far only included the better-known brands, I would certainly have no hesitation in recommending the SVBONY SV503 be added to their shortlist.

As for the price? The telescope currently sells through SVBONY’s website for just US$399.99. Compared to the roughly equivalent Skywatcher ED80, which retails at £379, the SV503 80ED is extremely competitively priced, even taking into account the Skywatcher ‘scope including a finder shoe and a hard carry case and, if my experience is anything to go by, anyone choosing the SV503 will be extremely happy with that choice.

by Cindy
Voting for February Astrophotography !

by Cindy
Is my SV503 scope glass defective or the camera qu ...

What a great pile of. infrmatve poo.

Great review, I shall be asking my comms to ordera few for our next mission. keep it up..

Good review! I am a novice at this and well written and honest reviews of products not well known, are extremely beneficial, informative and much appreciate it!