1.1 In May of 2020, Rita Hu of SVBony sent an SVBony SV503 80ED refracting telescope to Kevin Cobble, a friend of mine from the Texas Astronomical Society of Dallas, for evaluation testing and review.  I had been involved in deep sky astrophotography for the past ten years, so Kevin asked me to evaluate the astro-imaging capabilities of the SV503.   My imaging telescopes include a C9.25 Edge HD SCT and a SW Esprit 100 ED APO Triplet, both are premium imaging platforms costing more than US$2000.  I was both curious and skeptical about the performance of an imaging telescope costing not much more than one of my premium eyepieces.

1.2 When I received the telescope, I was immediately impressed by the handsome appearance and fine finish.  The SV503 has an 80mm ED doublet objective made of S-FPL51 glass.  The telescope has a focal length of 560mm, so it operates at a relatively fast focal ratio of f/7.
The optical tube assembly (OTA) comes with felt-lined tube rings and a dovetail bar and rack and pinion focuser with 10:1 fine focus capability.  I found the focuser to be very robust and could easily maintain focus with the additional weight of cameras, filter wheels and off axis guiders needed for astro-imaging. The OTA did not include a finder scope or star diagonal but these are not required for wide field astrophotography.

1.3 Figure 1 shows the configuration that I used for my imaging testing of the SV503 80ED.  I added an Orion 60mm guide scope with a Lodestar II guide camera to the top of the tube ring assembly and attached my ZWOASI294mc-Pro one-shot color (OSC) camera to the focus tube.  The ASI294mc camera has an APS-C sized sensor with a diagonal measure of 24 mm, so with the 560 mm focal length, it produces a field of view (FOV) of approximately 2.4 degrees.  That FOV is large enough to capture many popular open clusters and nebulae.
I mounted the SV503 on my Celestron CGEM mount.  The telescope, guided scope and cameras weigh in at approximately 7 pounds.  The CGEM mount with a 40-pound payload rating is definitely overkill.  This SV503 imaging configuration could easily be supported by a lighter and less expensive equatorial mount. 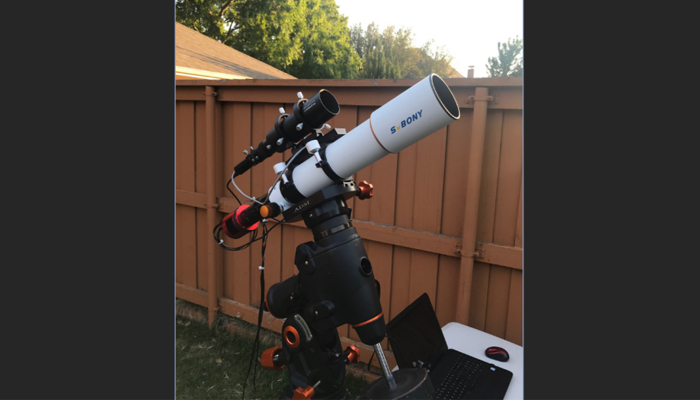 2.1 I set up the SV503 in this imaging configuration in my Bortle 8-9 backyard in a suburb of Dallas, Texas.  While I waited for dusk, I took advantage of the bright first quarter moon to do some visual observations with a star diagonal and eyepieces.  I used the bright moon to assess any residual chromatic aberration in the ED doublet.  The limb of the moon and edges of craters near the terminator showed only a slight color fringe.  The color correction of the ED doublet was almost as good as that of my APO triplet Esprit 100 and a bit better than that of my 100 mm APM APO binoculars.
2.2 As the sky darkened, I performed a visual star test of the SV503 optics using the first magnitude star Spica which was near the zenith.  I observed the star’s Airy disk at 122 X using a 5mm Tele Vue DeLite eyepiece.  The diffraction rings showed good contrast and symmetry both inside and outside of focus.  The Airy disk is notoriously hard to capture photographically even in conditions of very good seeing.  Figure 2 shows the images I was able to capture of the star, Spica with the camera mounted to the SV503 and with the region of interest (ROI) of the camera reduced to the region near the Airy disk.  The figure shows that diffraction patterns show well-behaved fringes with no evidence of pinched optics, misalignment or obvious aberrations. 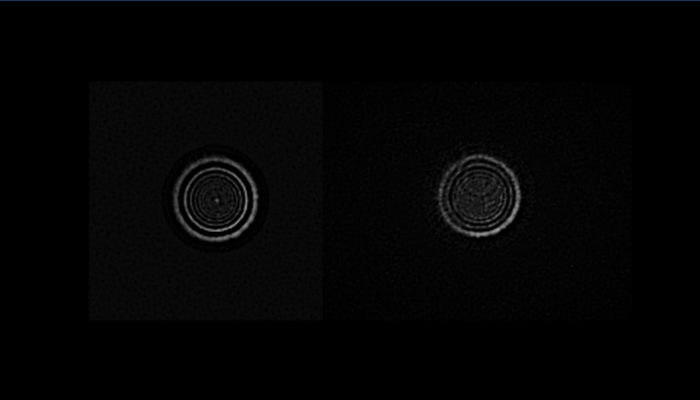 Figure 2. Diffraction Patterns of Star Spica.  Right: Inside of Focus    Left: Outside of Focus
2.3 I waited until the moon had set and the constellation Cygnus was high above the horizon to image the North American Nebula.  Because of the light polluted skies from my backyard, I use a multi-passband narrowband filter with my OSC camera to image emission nebula.  The filter is responsive to Ha and Oiii emissions from these nebulae and effectively blocks the emissions from street lights.   Figure 3 shows the processed image of the North American Nebula (NAN) I obtained from a 90-minute exposure using 2-minute subframes.    The NAN image on the left is visually very appealing with very good definition and contrast especially in the bright red Ha regions of the nebula.   It is a very decent image of the North American Nebula considering the relatively short exposure time with f/7 optics.
The image on the right was obtained using the Aberration Inspector Script in Pix Insight.  That script produces a mosaic of enlarged images from the center, sides and corners of the NAN image to assess field curvature in the image.  The shapes of the stars, especially in the corners of the NAN image indicate that the scope’s optics is not producing an optimally flat field over the camera sensor.   This degree of field curvature is common in refracting telescopes without secondary optics to flatten the field. 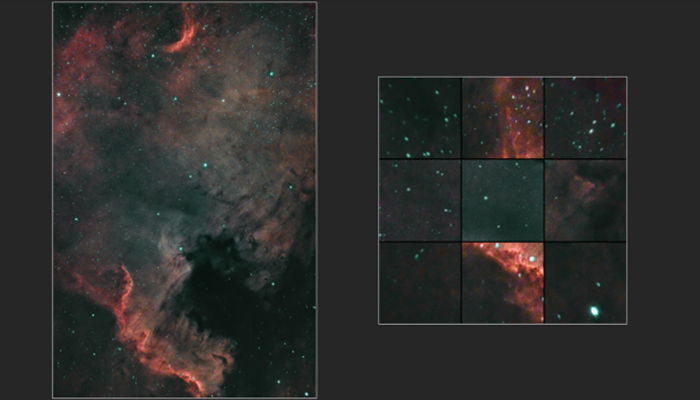 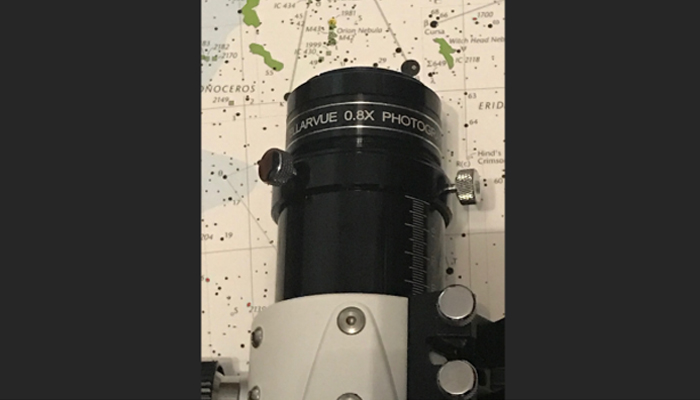 3. Testing With the 0.8x Reducer/Field Flattener

Figure 5 shows the image from another 90-minute exposure of the North American Nebula captured with the SV503 80ED using the 0.8x R/F.  This configuration has an effective focal length of 448 mm, produces a diagonal field of view of nearly 3 degrees.  That field of view is large enough to capture images of the Andromeda Galaxy!  The system with the reducer has a fast f-ratio of f/5.6.  The wider field of view and near 1.6 advantage of light collection ability with the R/F are apparent in the NAN image on the left.  More importantly, the Aberration Inspector image show nearly ideal star shapes over the entire image indicating no noticeable field curvature over the sensor area. 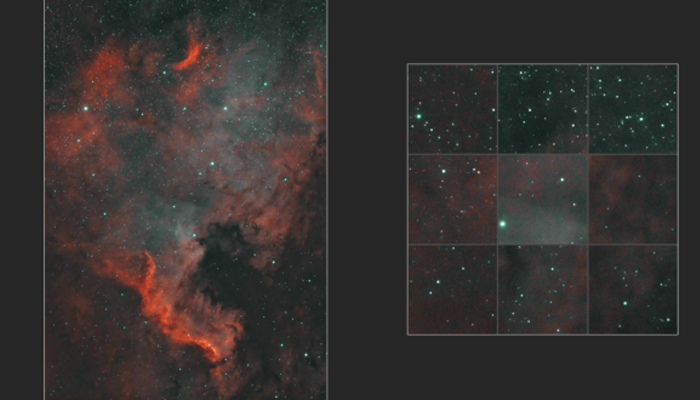 Figure 5. SV503 With 0.8x Reducer Field Flattener Image of the North American Nebula and PI Aberration Inspector Analysis
I was very impressed by the imaging results shown in Figure 5.  So much so that I was reluctant to send the SV503 80ED on to the next reviewer.  Instead, I made arrangements with Rita Hu at SVBony to purchase the evaluation unit.   The SV503 ED80 refactor with 0.8x Reducer/Field Flattener became a permanent part of my collection of imaging scopes.

4.1 The portable, lightweight SV503 80ED refractor has been my mainstay widefield imaging platform from my light-polluted backyard and from our Astronomy Club’s Dark Site in central Oklahoma. Figure 6 shows a few of the many images I have been able to capture with this versatile instrument. 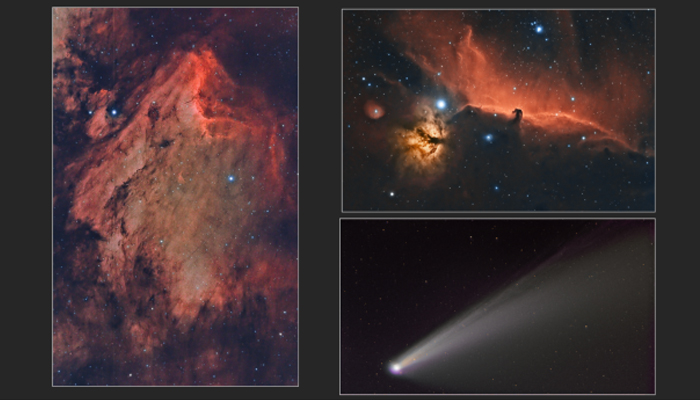 Figure 6. Images of the Pelican Nebula, Horse Head Nebula and Comet Neowise Captured with the SV503 80ED and 0.8x Reducer/Field Flattener
4.2 The SV503 80ED with R/F makes an excellent imaging platform for constructing ultra-widefield images by stitching together panels of individual image frames.  This is because the reducer/ flattener produces pinpoint star images to the very edges of the image frame.  I spent much of my imaging time this summer producing widefield, composite images of the Milky Way.  Figure 7 shows some of these composite images.
The image in the upper left is a 6-panel composite showing the structures in the Milky Way near the star, Sadr in the lower right of the image and the Crescent Nebula in the upper left.  This image was captured using a Ha filter with the ASI294mc OSC camera. The image on the upper right is a 6-panel composite showing the region in the constellation Cassiopeia containing the Heart and Soul nebulae.  The image at the bottom of the figure is a 6-panel composite of the region in the constellation Cygnus from the bright star, Deneb to the North American Nebula.  The star shapes in the individual panels are so well controlled by the R/F that it is impossible to find the seams in these composite images. 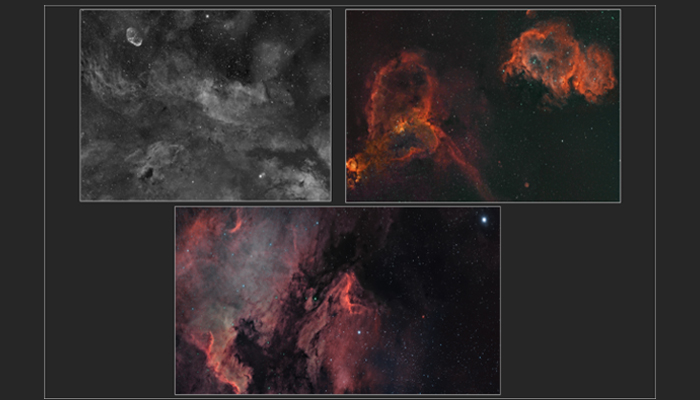 5.3 I am very happy with the performance of my SV503 80ED with the 0.8X reducer/flattener.  If such a fast, high performing, light weight imaging system was available ten years ago, it would have saved me a lot of false starts and frustration with this hobby.  But as they say “better late than never”.  Today, I am a satisfied customer.

Thanks for your watching.

by Tyson
The journey of refractors